Once in a while, I have a dream that seems to have some important message, that I remember when I wake up, and for a while afterwards. Usually, I am the only person that knows about it. One time, a while ago, I had a dream that was so compelling that I got up and drew a couple pictures. I ended up putting the pictures in a file until my wife reminded me about it after the events of September 11, 2001.

I remember being in something like a classroom, when I noticed something out the window, in the distance. It looked like a volcano had exploded, like Mt. St. Helens, or Mt. Pinatubo. A huge, fast moving, grey cloud.

I went closer to the window. The view was as if I was several stories up, over some crowded city that I did not recognize. The streets that ran directly towards the cloud were a few blocks over to my right. There were other buildings to the left. (see the picture)

I saw quite a number of some kind of strange vehicle driving down these streets toward the cloud. They looked like they were in the shape of swans, with people riding on the backs. My impression was that the people were not afraid, but that many of them would lose their lives.

I looked at the street below. I remember seeing a firetruck, looking like one of those toy Playschool firetrucks.

I woke from the dream and told my wife. I felt very strongly that this would be one of those dreams that had something to do with our world. I got up, got out a piece of paper, and drew the pictures below with a pencil. 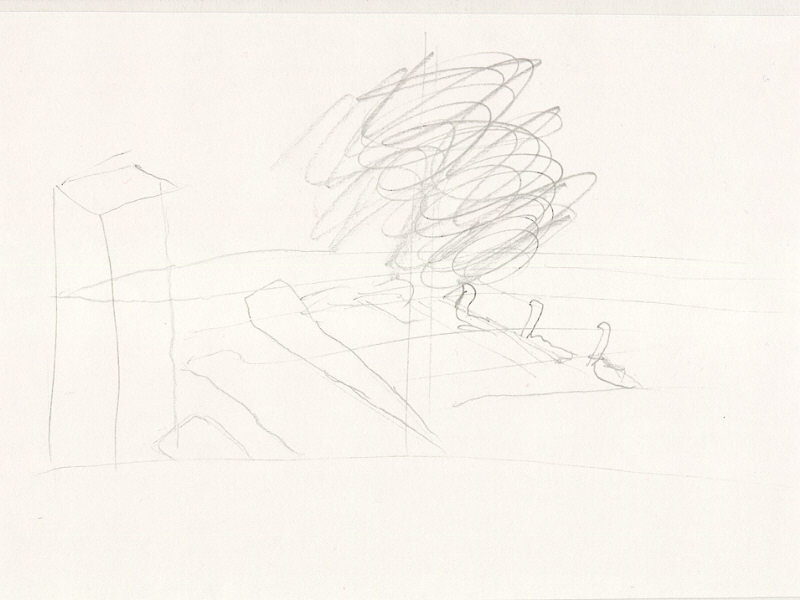 As you can see, I am not that much of an artist. I tried to draw the impressions, closing my eyes in between strokes of the pencil. If you look, you can see the cloud of course, the cross of the window pane, another tall building to the left. There are three of the unusual vehicles heading towards the cloud from the right. There were other buildings in the dream, but I did not have a strong enough image to know what to draw. I decided that I needed a closer view of the vehicles, so drew the following on the back. 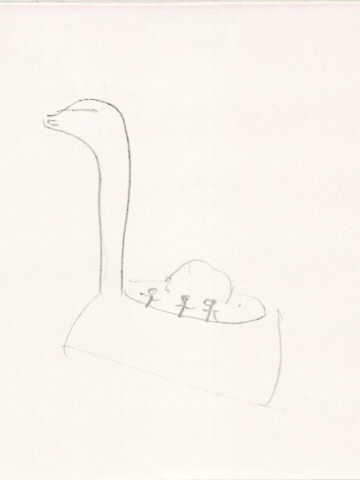 The vehicles had some long device that gave the impression of a neck of a swan. There were people in the back, visible from about the waist up, waving in some cases. The sides looked like some kind of dirty white, maybe even cloth covered. There was something in the middle behind the people, and presumably people on the other side as well. At the time I guessed that the wheels were out of sight, as I did not see the bottoms.

I also have dreams that seem to have little to do with reality, so I was not very confident that the dream had any real meaning. Still, I looked though the headlines for a while, to see if there had been any volcano exploding that might explain the dream. At the time, it seemed like the dream might have been something that was happening while I slept. I had the paper out for a few weeks, but eventually filed it in a cabinet. I thought about scanning it in and doing this write up, but never got around to it. I now wish I had written the date on the paper when it happened. I am not sure now when it was, except that my wife and I think it must have been in late 1998 or early 1999, because we think it was when we lived at the house before we bought the one we live in now.

When I got home from work the day that the World Trade Center fell, my wife mentioned that while watching the news all day, she had been remembering my dream, the one with the picture. I went to the cabinet and got it out. The next day, I copied the pictures, reducing the big one from 8.5x11" to 5x7". Then I scanned them in. Originally I thought I would use these to create more detailed pictures, but now I think I would be too tempted to make them fit the real images I have seen.

If the dream had anything to do with the events with the WTC, I think it would be the view of the collapse of one of the towers, from another building, maybe as much as a mile away. None of the video I have seen is from the perspective of the dream. If I knew more about the layout of Manhattan, I may be able to guess where it could be. It would be strange to have a dream of something that someone else saw. I would feel beter if I saw a video that someone took that is similar to my dream.

My wife thought that the vehicles may be airplanes, but my impression was that they were more likely rescue type, maybe firetrucks. The ladder being the neck, the turret behind the people, the people riding like firemen on a ladder truck. I have seen street level views of firetruck lined up in a way that could be similar to the dream, but from a different angle. The firefighters that rushed in and perished when the buildings collapsed could have been riding the swan like vehicles, on their way to heaven.